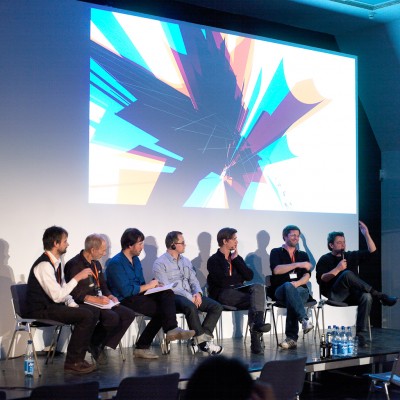 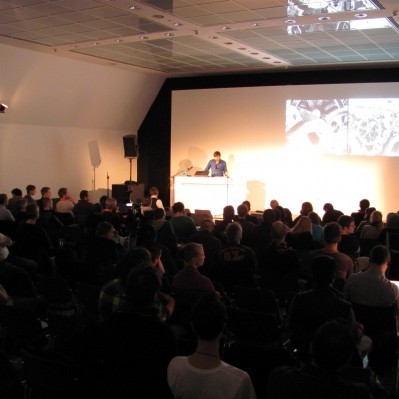 NODE13 comes with the key topic ‘The Rules’. Within the exhibition and symposium we are seeking to investigate Code and Software as a shapeable, cosmoplastic material.

‘The Rules’ in the context of NODE are first of all the rules of the computer: software. We design using software but we also design software itself.

In the last decades the world of code, the rules of computing, has become an autonomous medium of its own right. As an addition to earmarked applications these digital machines unfold their character and influence in their own sphere, which may be based only indirectly in the ‘real world’.

At the same time we can observe that everything dependent on computer rules is being transformed by them. Software leaves its initial medium and changes the way we organize knowledge, the way we produce food, interact and organize ourselves politically etc.. New software produces new behavioural patterns. It seems that the regularity of software seeps into the ‘real world’, thereby changing it.

From this perspective, perception in a digital society changes: The world appears as an object of a computer-centred subjectivity, which shapes this very world-object according to its own rules. From this point of view rules appear as the all-connecting element, as a common language.

‘The Rules’ investigates the correlation of working with ‘rules’ of the computer and the transformative processes in our society. We discover an interrelationship between the practical, aesthetic work with the computer and the alteration of our reality. This means a huge responsibility for the use of digital tools. ‘Generative design’ is not only a question of aesthetics and the search for a new ‘operating system society’, not only a question of politics.

Thinking of rules as shapeable, cosmo-plastic material is not new, but since the predictions of its early years (cybernetics) and the ‘practical illustrations’ of the 2000s a natural interpenetration of reality and digital rules has been established, which gives new arguments to the discourse.

The reflection on the ‘The Rules’ is divided into two complementary formats: an exhibition and a symposium with the same title. The works of artists we invited as well as more than 500 project proposals that came from our Open Call are presented in the exhibition. Put together, these works provide a report on the conditions of life in a regulated world.

The search for an understanding of these processes and an appropriate terminology is ubiquitous and for example manifests itself in the debate about the ‘New Aesthetic’. NODE13 though tries not to limit ‘The Rules’ to an aesthetic perspective, but also to facilitate a scientific and theoretical investigation via the symposium accompanying the exhibition.

In two days theorists and artists of international renown will discuss the rules of the digital world and their influence on other sets of rules – society, biology or art. Which autonomous creative powers are prevalent in computers and how do they change our understanding of all the areas that are in a process of transformation by computer technologies? In addition to the philosophy of digital media, the focus will be put on the relationship between code and consciousness, the theory of the ‘New Aesthetic’, the potentials of synthetic biology or the shaping of public opinion via social networks (liquid democracy).