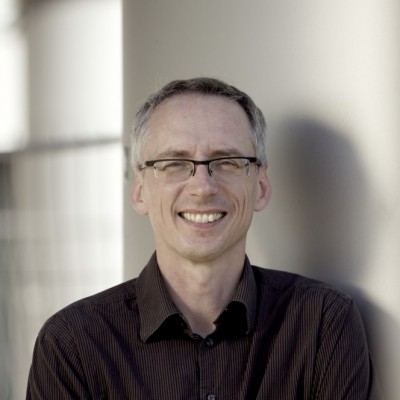 Dr. Andreas Broeckmann is an art historian and curator who lives in Berlin and Lüneburg. He has been the Director of the new Leuphana Arts Program at Leuphana Universität Lüneburg since October 2011. He was the Founding Director of the Dortmunder U – Centre for Art and Creativity (2009-2011) and Artistic Director of ISEA2010 RUHR, the 16th International Symposium on Electronic Art in the context of the European Cultural Capital, Ruhr.2010.

From 2000 to 2007 he was the Artistic Director of transmediale – festival for art and digital culture Berlin, and from 2005 to 2007, one of three artistic directors of TESLA – Laboratory for Arts and Media in Berlin.

From 1995 to 2000, he worked as a project manager at V2_Organisation Rotterdam, Institute for the Unstable Media. Indepently curated exhibitions include projects at Van Abbemuseum Eindhoven (‘Dick Verdult – and on Sundays we celebrate Friday’), FACT Liverpool (‘MyWar – Participation in an Age of Conflict’, 2010), Hartware Dortmund (‘TRUST’, 2010), Stedelijk Museum Amsterdam (‘Deep Screen – Art in Digital Culture’, 2008), Media Art Biennal Seoul (‘media_city_seoul’, 2008), Skuc Gallery in Ljubljana (‘KRcF – Room for Manoeuvre’, 2006), at TENT/Witte de With in Rotterdam (‘Tracer / Neuralgic’, 2004), and with Kontejner / MaMa in Zagreb (‘Runtime Art’, 2004).

Broeckmann studied art history, sociology, and media studies in Germany and Britain. He holds a PhD in Art History from the University of East Anglia, Norwich/UK. He is a co-founder of Les Jardins des Pilotes, and is a member of the Berlin-based media association mikro. He co-maintains the Spectre mailing list and initiated the Syndicate mailing list. In university courses, curatorial projects, and lectures he deals with art, technology, digital culture, and an aesthetics of the machinic. He is currently working on a study about 20th century machine art.