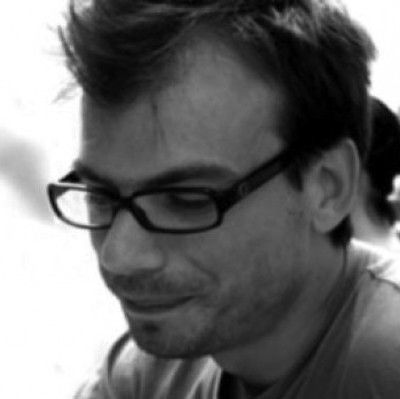 Filip Visnjic is an architect, lecturer, curator and a new media technologist born in Belgrade now living in London. He specialises in directing new media projects while also contributing to a number of blogs and magazines about art, design and technology. He is an editor-in-chief at CreativeApplications.Net, art director and curator at Resonate, director at Working Architecture Group and he lectures at a number of universities in the UK.

As a founder and editor-in-chief of CreativeApplications.Net, a leading digital arts blog, Filip has influenced the digital arts discourse like few others have. He spoke at OFFF Festival, onedotzero, DATA, Victoria & Albert Museum, UCA and many others.

In 2012, he co-directed and curated Resonate, new educational platform and a festival located in Belgrade, Serbia. It’s aim, to bring together world class artists to drive a forward-looking debate on the position of technology in art and culture.

CreativeApplications.Net,(CAN), launched in October 2008 by Filip Visnjic and is one of today’s most authoritative digital art blogs. The site tirelessly beat reports innovation across the field and catalogues projects, tools and platforms relevant to the intersection of art, media, and technology. CAN is also known for uncovering and contextualising noteworthy work featured on the festival and gallery circuit, executed within the commercial realm or developed as academic research. Contributions from key artists and theorists such as Casey Reas, Joshua Noble, Jer Thorp, Paul Prudence, Greg J. Smith, Marius Watz, Matt Pearson and Filip’s numerous festival involvements and curation engagements are a testament to CAN’s vital role within the digital arts world today.